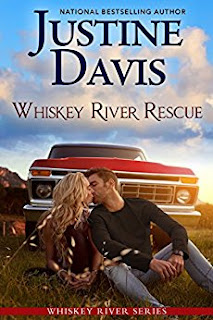 Still reeling from the unexpected sale of the land she and her horses live on, horse rescuer Kelsey Blaine is frantic when she comes home to find her possessions already boxed up and her house being bulldozed without any notice. Normally calm and kind, Kelsey becomes furious and impulsively cuts a privacy fence to confront the culprit–her mysterious neighbor, Joe.

Joe Kilcoyne is in a desperate place. He guards his secrets and hides from the world for a reason. He's the hottest topic of speculation around Whiskey River, but no one has ever dared to get close to him. That is, until fiery Kelsey comes barging straight into his life.

The last thing Joe needs is for Kelsey to breach his defenses and make him confront his past. But when her sunny, open, and determined personality collide with a haunted man with no idea how to reconnect with the world, the sparks that ignite shock them both.


I enjoyed the rest of the Whiskey River series, so I was excited to read another installment in the series.  This one ranks right up there with the rest of them.

When Kelsey Blaine finds out the land she rents and runs her horse rescue on is sold, she doesn’t quite know what she will do.  She doesn’t know where she will live or where to move her horses.  Full of anger, she confronts her neighbor, known by everyone in town as Crazy Joe, to find out what’s going on.  Little did Kelsey know she would soon form a friendship with Joe and learn his secret.  Kelsey might be good with horses, but she is just as good helping Joe move beyond the traumatic past that has held him back for a long time.  And with just a little bit of help, Joe might be able to trust someone enough to fall in love.

This book is an emotional read and touches on some sensitive subjects, so be sure to have kleenix ready.   I highly recommend it.