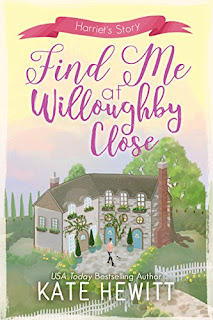 Harriet Lang had the perfect life, so she's left reeling when everything is taken from her in one fell swoop. Suddenly, Harriet learns her beautiful farmhouse in the Cotswolds is double-mortgaged, her husband Richard’s been unceremoniously fired—and he’s become a little too close to his young, sexy assistant.

Harriet moves into Willoughby Close with her three children, trying to hold her head up high. With the help of her neighbor and newfound friend Ellie Matthews, Harriet starts to rebuild her life--but dipping a toe in the dating pool feels strange and meanwhile her children are struggling in different ways. She wonders if starting over is really possible...

Then Willoughby Close begins to weave its healing magic on both her and her children, and Harriet begins to see a way forward. But when Richard reappears in her life, wanting to make amends, Harriet must make the painful decision about how much of the past can be forgiven—and what kind of future she is fighting for.


Another great installment in the Willoughby Close series.  Where the first two books seemed a bit more lighthearted and romantic, this one touches on deeper subjects.  It didn’t have the romantic feel like the previous books did.  It is more of a women’s fiction story about starting over after you lose everything.

It all started with a discovery on the phone bill.  Harriet Lang found out her husband Richard had been making many middle of the night phone calls to his secretary.  When she confronts Richard about the discovery and finds out he lost his job six months ago and has been confiding in his former secretary, Harriet’s world falls apart.  Piece by piece, everything Harriet loved, from her prized home, to her car, the children’s after school activities, and even their horse, is stripped away.  Harriet is forced to move into a three bedroom apartment at Willoughby Close which even means not every child gets their own bedroom as they were accustomed to.  Richard doesn’t move with them, he gets a place in London where he can continue his job search.

While Harriet and her three children adjust to their new life, Harriet realizes her friends really weren’t the best of friends as she thought they were.  They turned on her when they found out she didn’t have any money and she split up with her husband.  She becomes friends with a couple of unlikely characters, one is her neighbor (from the previous book) who she didn’t think much of when she first met her and another is the eccentric elderly lady who owns Willoughby Manor.  Harriet also comes to terms on what is going on in her marriage and does a lot of soul searching trying to figure out her next move.  She doesn’t want to lose what she and Richard had and doesn’t want to break up the family, but she has trouble moving past what Richard has done.  It was interesting to watch the story unfold.  The book ended up in a way I didn’t predict.

If you read the previous book in this series, Harriet is mentioned many times and the author didn’t paint a pretty picture of her.  I honestly didn’t like Harriet.  But in this book she redeems herself and I learned why she acted the way she did.  I was glad to read Harriet’s story.  It all made sense then.  The book is well written and kept me interested throughout.