Review: A Prince in Plain Sight (Happily Ever After Book 2) by LuAnn McLane 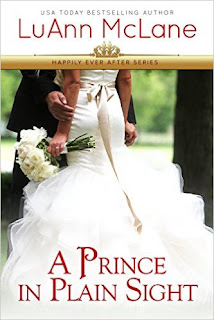 After her holiday romance with handsome Nick Worth ends with his disappearance, Anna Lee Brody hopes that he will return to Daleville, Alabama, just as he promised in the love letter he left behind. Even though she wears the rose pendant Nick gave her, she wonders if he will truly return to mend her broken heart…

Royal Prince Nicholas Worthington despises having to deceive Anna Lee but, for the safety of Calloway Island, he must turn the principality over as a territory under the protection of the United States. But when his life is threatened, her remote home is the perfect place to hide him. Can he convince the sweet southern belle that, even though his name might have been fake, his love for her was, and still is, very real?

We first met Anna Lee Brody and Prince Royal Nicholas Mackenzie Worthington in A Royal Christmas Gift.  This is the conclusion to their story.

In this book, Nick has returned to Daleville Alabama to be with Anna Lee and explains why he left abruptly and who he really is.  While he stays with Anna Lee, his identity must remain a secret as to not bring danger to Anna Lee, her family or the people of Daleville.

At first Anna Lee isn't sure what to make of him being a prince, but things quickly fall into place and the romance begins again.
As quickly as Nick arrives, he has to leave again without an explanation.

While visiting with her mother and sister, FBI agent Dylan Thompson arrives at the house and they are asked to come with him immediately.  They are whisked away to Calloway Island where Nick has a surprise for Anna Lee.

This is a very quick sweet story.  You definitely need to read A Royal Christmas Gift first as this is the conclusion to that story.  I honestly think the two books should have been combined into one.  By the short length and subject, I saw no need to split them up.  If you’re looking for something lighthearted and quick to read, I think you’ll enjoy this story.