Review: It's Not Me, It's You by Mhairi McFarlane 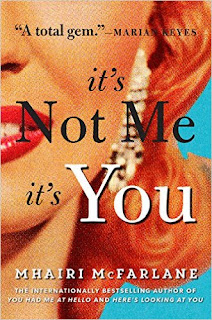 An achingly funny story about how to be your own hero when life pulls the rug out from under your feet. From the author of the bestselling YOU HAD ME AT HELLO


Delia Moss isn’t quite sure where she went wrong.

When she proposed and discovered her boyfriend was sleeping with someone else – she thought it was her fault.

When she realised life would never be the same again – she thought it was her fault.

From Newcastle to London and back again, with dodgy jobs, eccentric bosses and annoyingly handsome journalists thrown in, Delia must find out where her old self went – and if she can ever get her back.

Fun.  Witty.  And lots of laugh out loud moments.

When Delia Moss discovers her boyfriend of ten years has been cheating on her it sets her in motion to make big changes in her life.  She is leaving Paul and Newcastle and moving to London to stay with her friend Emma until she can decide what she will do with her life.

While in London, Delia finds a job and it’s not quite as she expected.  She gets caught in the middle of a battle between her boss and a competing businessman.  She finds herself involved in some unusual situations (that are often laughable after the fact) and she makes some new friends. She also starts working on her cartoon again, The Fabulous Miss Fox, which has been stored away and not thought about in years.  Will Delia find a new life and love in London or will she go back to Newcastle with her tail between her legs as Paul wants her to?

The length of the book almost turned me off, but once I got into it, it was hard to stop reading.  I felt drawn into Delia’s life and everyone around her and just had to know the outcome.  This book is a fun adventure and well worth taking the time to read it.