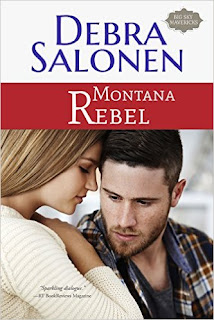 Don’t look down and don’t give up.

Justin Oberman‘s credo for living his adventurous–some might say death-defying–life to the max served him well until the unfortunate outcome of a climb made him walk away from the sport he loved. A lucrative new job offer could pave the way to a more traditional life in Marietta, Montana, where his two best friends have fallen in love with the women of their dreams. But settling down always seemed more daunting than Everest and not worth considering until a mysterious lady in red walks into his life on New Year’s Eve. Suddenly, that happily-ever-after stuff Flynn and Tucker have been raving about looks within reach.

The first fall is always the hardest.

Nikki Magnesson Richards has loved Justin Oberman most of her life. First, from the safety of her brothers’ old tree house. Later, with unrequited teen-age angst. Her poorly thought out attempt to get him to notice her cost them both dearly. Now, a dozen years later, her fairy godfather boss has orchestrated the most romantic meeting possible–the Big Sky Mavericks Masked Ball for Charity. A kiss at midnight with her very own Prince Charming isn’t too much to ask, is it? But what are two star-crossed lovers supposed to do when one kiss isn’t enough?

A heartwarming romance not to be missed.

Do you ever wonder where you’ld be if you kissed that one person who got away but took a piece of your heart?  Nicole Richards is about to find out when she returns to Marietta after her boss decides to hire her school girl crush, Justin Oberman.  Their first meeting is at The Big Sky Mavericks’ New Year’s Eve Masked Ball.

Justin doesn’t recognize the sexy lady in the red dress and fantastic mask as Nikki, the girl next door, who crashed his climbing party in Yosemite and fell off the side of the mountain breaking her back.  Nicole’s family still holds Justin responsible for the accident.

Does Nicole’s boss J. Angus Hooper has a plan of his own for hiring Justin for his new project?  Nicole confided in J. Angus about her feelings towards Justin.  So was Justin the real reason J Angus decided to branch out into a high-end, outward-bound-for-adults-with-impairments sort of operation or did he just want to get Nicole and Justin together?