Review: A Case for the Yarn Maker (Ainsley McGregor #2) by Candace Havens 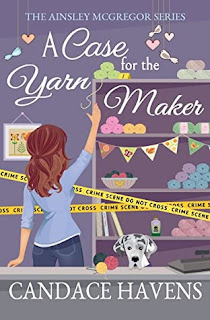 Spin a yarn… at your own risk.

Everyone at Bless Your Art in Sweet River, Texas, is excited about the Yarn Goddess (yes, that’s her real name) coming to town. Ainsley McGregor has set up a special event at the local community center, but when old Mrs. Whedon doesn’t see eye-to-eye with the Goddess about using quality yarn, a fight breaks out. Who knew the octogenarian had ninja moves like that?

It’s all fun and games until George Clooney, Ainsley’s Great Dane, finds Ms. Yarn’s dead body in a booth at Bless Your Art. Now the prime suspect is Mrs. Whedon, and while she’s not the easiest woman to get along with, there’s no way she’s the killer. At least, Ainsley doesn’t think so. As this yarn unravels, Ainsley and her quirky friends learn some interesting things about the case and the Goddess’s checkered past. But there’s a killer on the loose, and George may be the only thing protecting Ainsley from certain death.

There was a murder at Bless Your Art, Ainsley McGregor’s store in Sweet River, Texas.  The victim is Yarn Goddess, a popular crochet and knitting expert, who was there for a book signing and class.  This sends Ainsley and her group of friends on a quest to find the murderer, even though Ainsley’s brother told her to keep her nose out of it.

This mystery kept me guessing to the very end.  There were so many strong suspects that I couldn’t figure out which one was the killer until it was revealed.  I really enjoyed the first book in this series and couldn’t wait to get my hands on this one when I saw it was coming out.  I like the authors writing style and the way each of her characters feels like an old friend by the time you finish reading the book.  I especially like George Clooney, Ainsley’s dog, who always seems to be at the right place at the right time.  He’s a true hero.  Even though this book can be read as a stand-alone, I would recommend reading A Case for the Winemaker first to get to know the characters better.