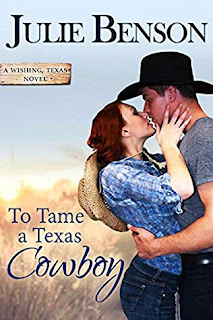 They want different things, but they just might need each other

Barrel racer Cheyenne Whitten returns to Wishing, Texas, after an injury, determined to recuperate and return to the rodeo circuit. But living with her over-protective mother only adds to Cheyenne’s problems. Desperate to move out and reclaim her independence, Cheyenne believes a service dog is the answer. That is, until she learns the waiting list for one is up to five years.

Having lost his fiancée two years ago, Cooper Abbott wants to run his veterinarian clinic and rebuild his life. A calm, stable, uneventful life. Then Cheyenne shows up asking for help getting a service dog, and Cooper finds he can’t refuse the feisty redhead.

Cheyenne and Cooper insist a relationship is the last thing they want. Cheyenne is focused on her health and returning to the rodeo. Cooper’s heart is still raw from loss. But it could be they’re exactly what each other needs.

This was a sweet story.  Each of the characters had something the other needed.

Cheyenne Whitten suffered from seizures and she was tired of her mother and sister always watching over her like she was a baby.  She needed some freedom.  She needed a service dog.  When Cheyenne’s best friend suggests they take a road trip to see Cooper Abbott, a veterinarian and has connections to organizations with service dogs, Cheyenne decided it would be worth it.

Cooper was still struggling with the loss of his girlfriend who passed away two years ago.  He wanted to keep Olivia’s dream invention, the SeizureReader, alive but he needed someone to test it on.  Cheyenne showed up at just the right time.  Cooper needed to keep an eye on Cheyenne to make sure everything was working properly, so they moved in together.  As they spend time together, they realize how much they liked each other and started a relationship.  But, when Cheyenne needs a second opinion on surgery and Cooper refuses to ask his father, who is a brain surgeon, for help, it just might be the end of them.  Now it’s up to Cooper to swallow his pride, for the women he loves, and talk to his father.

This book was really good.  I liked how the author gave good backgrounds on the main characters and their friends without it getting confusing.  Sometimes when I read a book that has a lot of characters, I have trouble keeping them straight.  I also learned something about service dogs and how they help people.  The story flowed along nicely and kept my interest the entire time.