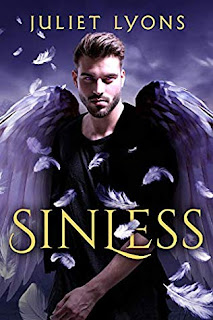 The task is laughably easy...until he meets Grace Black

Hadrian Cross is a half-angel with an attitude. He avoids his goody-two-shoes angelic family and prefers to slum with humans until he tangles with the deadly vampire queen, Esme. Fearing for the lives of his mortal friends, he approaches an ancient archangel for help, but there are strings—lead mortal woman, Grace Black to her soulmate. Hadrian happily complies. All women want to fall in love, right?

Book store owner and cheerful snark, Grace Black doesn't believe in soulmates, marriage or regrets so when an angel arrives at her front door espousing the virtues of true love and destiny, she laughs in his face. Then makes him take off his shirt to prove he has wings. Grace doesn’t miss the ex who’s her supposed destiny, but Hadrian shirtless and in full flight is not something she wants to forget.

She agrees to his ridiculous offer mostly out of boredom and curiosity, but as they spend time together, they both worry the universe has its wires crossed.

What a fun and imaginative book!

Half angel, Hadrian Cross, and book store owner, Grace Black are brought together when Hadrian gets himself in a situation, involving a vampire, where he has to go to an archangel, Tobias, for help.  Hadrian is sent on the task of reuniting Grace with her soulmate.  What Hadrian isn’t prepared for is the instant attraction him and Grace have for each other.  Not being able to resist each other, Hadrian just might have blown the deal he made with Tobias and he could find himself in a heap of trouble when it comes to the vampire.  Will Hadrian be able to keep his end of the bargain and still keep the girl of his dreams?

This is not a book I would have typically picked up.  I have never been attracted to angel stories (until now).  But the blurb intrigued me.  And, there was a vampire, which I do enjoy reading about.   In the end, I really enjoyed this book and hope there will be a sequel to it.  I feel there are more stories that can be told with some of the other characters.  And, I would love to read more about swoon-worthy Hadrian, the half angel disguised as a bad boy with his rock n roll t-shirts and leather jacket.