Review: Off the Record (London Phoenix #3) by Rebecca Crowley 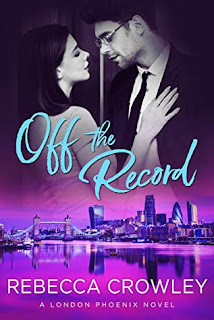 When these friends become lovers, they might just turn into bitter enemies

Ebon Brody and Sophie Caplan have been close friends – and closer rivals – for as long as they can remember. One night they become even more, and shake hands on a no-strings agreement. They’ve always been able to keep their hands off each other’s stories – surely, they can keep their hands on each other at the same time.

But when they both begin to circle the same scoop – a human trafficking scandal that could bring enormous accolades for either of their competing papers – they discover it’s harder to avoid those strings than they thought.

Sophie was secretly furious when Ebon didn’t attempt to poach her to his newspaper, the Phoenix, and she resolved to win at all costs. Now she has to choose between the man she’s always wanted and the career she loves more than anything. Ebon wants to prove himself to his older brothers and to the woman he’s always admired, even if it means snatching a story out from under her feet.

Journalists, Sophie Caplan and Ebon Brody, have always been best friends even though they work at competing newspapers.  This time they are both working on the same story and as soon as Ebon thinks he has a lead, he finds Sophie is already one step ahead of him.  Ebon will do anything to get the scoop first, including seducing Sophie to squeeze information out of her.  Little did Ebon know, Sophie needs him as much as he needs her, and not just for the story.  Will this be the end of their friendship or the beginning of a whole new relationship?

I enjoyed this book even though it took a few chapters to hook me.  But once I got into it, I couldn’t put it down.  This story goes deeper than the previous books in the London Phoenix series with a human trafficking case that Sophie and Ebon are working on.  This book was well written and I could tell the author did some serious research on her subject before writing it making the scenes feel real.  Even though this book could be read as a stand-alone, but I would highly suggest reading the series in order to get to know each of the brothers as their stories are played out.