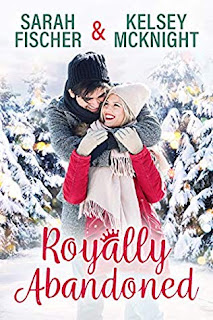 A seat on the throne or a place in her heart?

Greyson Montgomery dreams of a simple life, but as the crown prince of Aldora, simple is not in his future. Before ascending the throne on Christmas Eve, Greyson is given one month to explore how the other half lives. Armed with a few hundred dollars and a fake backstory, Greyson flies to Savannah, Georgia, to see if he has what it takes to chase the American Dream.

Scarlett Calhoun is a Southern Belle with a heart as big as a Georgia peach. When she meets the charming construction worker, Greyson, it isn’t long before she is embracing the holiday cheer. Soon, she’s teaching him how to cook, falling for his exotic accent and soulful eyes, and joining him on picnic lunches where they talk for hours.

With Christmas Eve nearing, Greyson must fly back to Aldora and either abdicate the throne, or take his rightful place as king. Will he ignore his birthright to remain with Scarlett or will she be royally abandoned?

Charming and sweet.  This book played out like a Hallmark movie in my mind.

The only thing Greyson wanted was to be like other men.  He was tired of the royal lifestyle.  He didn’t want to become king of Aldora.  So, he picked up and moved to America where no one would know who he was.  He settled in Savannah, Georgia, where he became a construction worker.

Scarlett was a true southern belle, right down to her high society family who wanted her to marry in their circle of friends.  Scarlett didn’t want any of it.  She wanted to live her life and didn’t care if that life had a man in it or not.  But, when she meets Greyson, everything changes.  He was definitely not the kind of man her mother would approve of, but he was a good man, and that’s what Scarlett wanted.  When Greyson reveals his true identity, Scarlett is blown away.  She accompanies Greyson back to Aldora to meet his family over the Christmas holiday and everything seems to be perfect.  But, is it really?

I just wanted to crawl into the pages of this book and live.  It was that good.  The characters felt like people I could be friends with and the descriptions of the castle and the Aldora countryside blew me away.  I hope there will be another book following this one because I am already ready to go back to the castle.  This is a sweet, clean romance that anyone who loves a good fairy tale will enjoy.