Review: Once Upon a Texas Christmas (Whiskey River Christmas #4) by Katherine Garbera 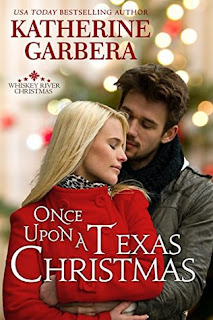 Avery Burton loves her job as assistant to Logan Calloway. A big time Hollywood A-lister, Logan spends all his time on the West Coast leaving her to run his charity in Whiskey River. Staying busy and giving back to the community that is the only real family she’s ever known suits Avery just fine…until Logan announces he’s coming home for Christmas.

Ever since his mother abandoned him as a young boy, Whiskey River hasn't felt like home to Logan Calloway. Still, he heads home for the holidays, intending to reflect on his career and personal life. When he sees his assistant Avery in his home, Logan begins to realize that Whiskey River has more to offer than just bad memories.

As Logan and Avery spend more time together working for the charity, it becomes impossible to deny their chemistry and attraction.

Avery Burton knew she shouldn't get involved with her boss, Hollywood star Logan Calloway.  But the more time she spent with him, the deeper she fell for him.  And, with a little help from a matchmaking ghost named Felicity, they just might find the love that has been right there all along.


This is the perfect book for any romance fan.  Avery and Logan were destined to be together.  Even though both had lived totally different lives, they were similar in the way that their parents did not set a good example of true love.  Logan, the bad boy from Whiskey River, lived with the memory of his parents fighting all the time and an alcoholic father who killed a family while driving drunk.  Avery's parents were scientists who would rather work than spend time with her.   Avery and Logan had to figure out how to love all on their own.  This was an easy story to get hooked on and in the end, one you won't forget.  I could easily picture this book as a fun Christmas movie.
Posted by Janine at 6:13 PM