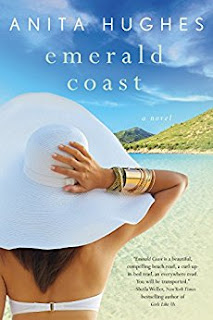 Set on the glamorous Italian island, Emerald Coast is a touching and humorous story about marriage and the difficulty of finding love and happiness at the same time.

Lily Bristol arrives at a luxurious resort in Sardinia for the grand opening of her newest home furnishing store on the Emerald Coast. She’s a successful business woman with an international chain of stores from San Francisco to Milan. Thirty-two and newly divorced, she’s ready to handle things on her own. At least until her private butler, Enzo, escorts her to a beautiful suite where she notices a suspiciously familiar pair of men’s slippers and shaving kit.

Lily is horrified. Her ex-husband Oliver moved out of their restored Connecticut farmhouse six months ago, but they booked this trip when they were trying to save their marriage and never cancelled the reservation. Oliver, a food critic for the New York Times, is here covering Sardinia’s hottest new restaurant. The only other available room is the adjoining suite; and worse, Oliver isn’t alone. He’s brought a twenty-something named Angela with him.

Lily is determined to make do and enlists Enzo to find her a suitable man. But it’s not as easy to find new love as they both expected. When Lily and Oliver find themselves alone on a very important night, they turn to each other. Sparks begin to fly, but can they be together without breaking each other’s hearts?


Marriage is not always perfect.  It is something you have to work on every day.  When it comes to a strong relationship, there has to be trust and no secrets.  Lily and Oliver Bristol found this out the hard way and it cost them their marriage.   In this book we learn what happened to cause their divorce and how they have moved on.  But, is there still something between them?  Are they still in love or is it just the memories that make it seem so?

When Lily goes on a business trip to Sardinia, she had forgotten the reservation was originally made for her and Oliver.  When she finds a man’s shaving kit in her room, she thinks there is a mix up in the reservations.  She quickly asks for another room.  The only room available is the adjoining room.  Lily gets the surprise of her life when she finds out Oliver is the man who was using the room.  He was also there on a business trip, but he brought his girlfriend Angela with him.  Lily decides it’s time for her to move on and is introduced to Ricky, a local boutique owner.  They hit it off really well and spend a lot of time together.  Lily and Oliver still seem to bump into each other often and their thoughts are flooded with memories.  Will either be able to really move on and find love again?

With the beautiful setting of Sardinia’s Emerald Coast, fashion and food, along with an intriguing story, this book is one that I will definitely want to revisit in the future.


Thank you to St. Martin's Press and NetGalley for the advance copy of this book.