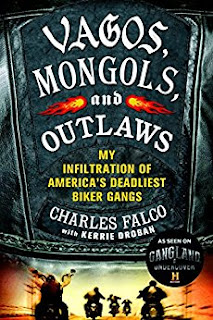 The basis for the hit TV series Gangland Undercover!

Despite lacking any experience with motorcycle gangs, Charles Falco infiltrated three of America's deadliest biker gangs: the Vagos, Mongols, and Outlaws. In separate investigations that spanned years and coasts, Falco risked his life, suffering a fractured neck and a severely torn shoulder, working deep under cover to bring violent sociopaths to justice.

His dedication was profound; Falco spent almost three years infiltrating the Vagos gang and rose to second in command of the Victorville, California chapter. He even served time in San Bernardino's Murder Unit and endured solitary confinement to protect his cover and the investigations. Falco recorded confessions of gangland-style killings and nearly became a target himself before he sought refuge in the Witness Protection Program. But discontent to remain on the sidelines and motivated by a strong sense of duty, Falco eventually left the Program and volunteer his talents again to infiltrate the Mongols and Outlaws, rising in rank to Vice President of the Petersburg, Virginia Outlaws chapter.

His efforts culminated in sixty two arrests of members for various crimes, including assault and murder. Executing one of this country's most successful RICO prosecutions and effectively crippling the criminal enterprise, Falco's engrossing narrative of the dangers of the biker underworld harkens back to Hunter S. Thompson's classic Hell's Angels, vividly recounting a life undercover.

As a fan of the TV show Gangland Undercover, I knew I had to check out this book. And boy was I glad I did.  There is so much more to the story that the show didn't touch on.  If you want to know what life is really like in some of our country's most dangerous biker gangs or as an undercover agent in one, you need to read this book.  It's an addictive, action packed, true story that pulls you in from the very start.

This is not the cheesy BS you read in some fiction books or see on tv.  This is real life; dark, gritty and violent.  I promise this in one book you will not be able to put down. It's an adrenaline rush that you want to keep going until you finish the book.  And then you will be left wanting more.
Posted by Janine at 7:09 AM