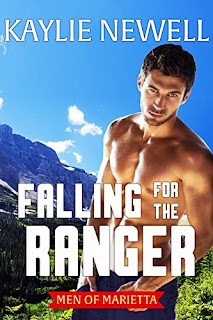 When Todd Harris makes the move from the mean streets of Chicago to the sleepy roads of Marietta, Montana, it’s not just his career that’s changing… it’s his entire life. Going from police officer to forest ranger isn’t too much of a stretch, but getting used to how things work in a small town is. As he settles in, Todd realizes he loves the slower pace of the countryside, but then… an Olympic gold medalist comes to town and shatters his hard fought peace.

But the town’s new forest ranger doesn’t like attention and he sure as hell isn’t looking for any kind of relationship with someone who does. When Molly Cordero gets lost in the woods though and Todd is the one who saves her, the spark he’s been trying to ignore smolders and ignites. It's then that he realizes there’s a lot more to Molly than ambition and public adulation.

When Todd signs up for the Men of Marietta calendar shoot to raise money for Harry's House, a place for children to commemorate a fallen firefighter, Molly realizes the kind of man he is. With the shoot wrapping up, she faces a painful decision–return to her old life, or give her new life with Todd a fighting chance.

Todd Harris made the move from a big city cop in Chicago to a forest ranger in Marietta, Montana.  A slower pace of life is what he was looking for.  But, when Olympic gold medalist Molly Cordero comes to town, life gets shook up a bit more than Todd expected.


When Todd signs up for the Men of Marietta Calendar, it opens Molly’s eyes to what a great guy Todd really is.  After their rocky start, they learn to let down their guard and allow themselves to trust in love again.

I like reading about flawed characters and how they overcome their issues and find love again.  I also enjoyed the banter between Molly and Todd.  It made it a fun book to read.  The descriptions really brought the story to life and you can’t go wrong with a cute dog in the story either.
Posted by Janine at 4:32 PM