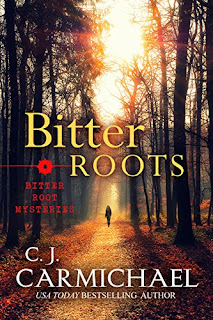 Dispatcher Zak Waller prefers working behind the scenes in the Sheriff’s Office of Lost Trail, Montana, but when a newcomer to the sparely populated town is brutally murdered—and the Sheriff is quick to pin the death on an unknown outsider—Zak starts his own private sleuthing.

On the surface Lost Trail is a picture-perfect western town, offering a simple way of life revolving around the local ranches and ski hill, but Zak knows the truth behind the façade. When his old school friend Tiff Masterson, whose family owns a local Christmas tree farm, moves back to town, the two of them join forces to get to the truth about the murder.

Bitter Roots is the first of three Bitter Root Mysteries.


An intriguing new mystery with an unpredictable ending.

No one knew much about Riley Concurran or what brought her to Lost Trail, but her brutal murder has everyone shook up.  The sheriff thinks it was an outsider who tracked her down.  But best friends, Zak Waller and Tiff Masterson think differently.  Together, they put all the pieces together and solve the crime.

I enjoyed this story a lot.  It was a nice change from what I usually read.  I liked the characters and plot.  I look forward to the rest of the series to learn more about other characters in the book.  The book kept me attention the entire time and I was unable to figure out who the killer was.  It was an exciting surprise to learn who it was.