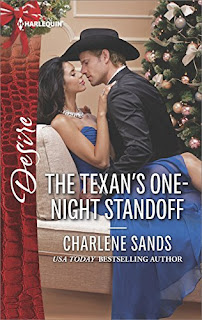 One night leads to a pregnancy bombshell! Only from USA TODAY bestselling author Charlene Sands.

Chicago real estate hotshot Brooks Newport is on a quest to find his true father. But tracking him to a small Texas town puts Brooks on a collision course with horse trainer Ruby Lopez. After a no-strings-attached night together, he's on his way.

When Brooks finally meets the father he never knew, he must come to grips with the past—and the very shocking present. Because Ruby works for the man. And she has a secret of her own—not only is Brooks finding his father, he's about to become one!

The Texan's One-Night Standoff is part of the Dynasties: The Newports series.

Brooks Newport had come to Cool Springs, Texas to meet his biological father Beau Preston.  His first night in Texas turns out to be one that he wouldn’t be able to forget.  Brooks meets a hot Latina in a bar and they end up back at his hotel room.  They both agreed it would only be a one night thing.   The next day when Brooks runs into Ruby at Look Away Ranch, he knew things would be going much further than just one night.  But Ruby works for Beau and he considers her part of the family, meaning she should be off limits.

Ruby Lopez and her boyfriend had broken up six months ago.  When she meets Brooks at the C’mon Inn, she decides it was finally time to move on, not with a full blown romance, but a one nighter would fulfill her needs.

While Brooks gets to know his father, he also gets to know Ruby even better.  Their secret get togethers bring out feelings they were both trying to deny.  But when Ruby’s ex-boyfriend, Trace, shows back up in Cool Springs, things get a bit more complicated.

I really liked this book.  Ruby and Brooks had great chemistry.  They were two opposites who brought out the best in each other.  I also enjoyed the other characters in the book.  They all worked well together to make a memorable story.  The book moved along really quickly and every page brought something new and exciting.
Posted by Janine at 11:52 AM