Bought to Carry His Heir by Jane Porter - Review 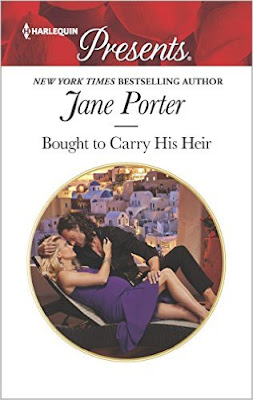 Held captive…
When Georgia Nielson is asked to be the surrogate for an enigmatic tycoon, she can't afford to say no. Before she realizes that she's struck a deal with the devil, she's trapped on his isolated Greek island, with no escape from the brooding master who stalks its shores!

Carrying his child!
Scarred by the loss of his wife, Nikos Panos's future rests on leaving behind a legacy. But Georgia's constant presence threatens to unleash the powerful hunger he's kept caged for so long. If he wants defiant Georgia to submit, he must confront the demons that haunt him…


In order to make ends meet and to put her sister through college, Georgia Nielsen decided to become a surrogate for a Greek tycoon.  The one thing Georgia didn't expect was to have to spend the last three and a half months of her pregnancy living on an isolated island with the reclusive Nikos Panos.  She looked forward to the day the baby was born and she could go back to her medical studies and life as she knew it.

Nikos was desperate to be a father and to have an heir to carry on the Panos name.  But he didn't need or want a wife.  He had sworn off women after his disastrous first marriage.  Nikos had selected Georgia from thousands of possible surrogates.  She met every requirement he was looking for.

When Nikos first saw Georgia step off the plane, his first reaction was how much she looked like his late wife Elsa.  But Georgia was far from being like Elsa.  She had her own mind and spoke up for what she believed in.  Nikos knew he would have a hard time resisting Georgia while she was staying with him.  He just needed to make it through the next few months and then he would have his son and Georgia would be on her way back to America.

At first Georgia and Nikos would butt heads in every conversation or situation.  Both were both very strong willed.  This made their passion extremely intense once they gave in to it.  This book was a perfect escape with the plot, setting, and great writing.  When I got to the end of the book, I wasn't ready to let go of Georgia and Nikos yet.  I really liked these characters.
Posted by Janine at 2:52 PM