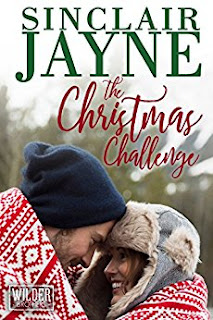 Prodigal daughter, infamous flirt and fiery-haired champion barrel racer Tucker McTavish blazes back home to Marietta with both a secret, and a personal challenge. She will keep a low profile at her twin sister’s Christmas wedding. Which means no whiskey. No kissing. No scandals. No fun. What she needs is a miracle, so it's too bad when she visits the legendary Miracle Lake to plead for inner strength: a tall, dark, and handsome bad boy is waiting with a challenge of his own.

Extreme sports guide Laird Hunter doesn’t do boring. And he thought he didn’t have secrets. He thrives in carving his own trail through tight and dangerous spots, but when he finds out his entire life has been built on a lie, he heads to Marietta for answers. But when he meets the redhead with the killer smile, laughing eyes and body with more curves than a mountain road, he finds himself asking a whole new set of questions.

Will these two daredevils – with more than a few secrets between them – find the one person from whom they don't need to hide ?


In the previous book, Want Me, Cowboy, Tucker came across as annoying and someone who didn't care about anyone but herself.  And the way she hurt her sister Tanner by coming on to her boyfriend Luke was not right at all.  But the carefree Tucker is working on redeeming herself in this book when she comes home to help Tanner prepare for her wedding.  She even vows to the month of celibacy in order to keep from causing any scandals while she is in town.

Laird was a character that I instantly felt drawn to.  He had been hurt by a girlfriend and recently lost the woman who he thought was his mother.  On his mother's death bed, she confessed to Laird that he was adopted and that he possibly had a twin.  He learned that he was born in Marietta and so he was there seeking answers about his birth and hopefully find his twin.  He is also searching for a place to put down roots and prove that he is not the man that his ex thought he was.

Tucker and Laird meet while skating on Miracle Lake and form a friendship which leads them to challenge each other in their goals, the reasons they are in Marietta.  But when they start sharing the small apartment at Triple T Ranch, things change quickly and they find themselves fighting the urge to just hop in bed together.  They realize they need to stay focused on their goals before anything else can happen.  It will be tough, but if they make it through the month, they can give into their desires.

Tucker and Laird are as different as night and day.  Tucker is outspoken and does as she wishes where Laird is more laid back and go with the flow type of guy.  Typically I would have thought their personalities would have clashed, but the author did a good job of making their differences work.  Their backgrounds and the writing made this a memorable book for me.
Posted by Janine at 7:28 PM