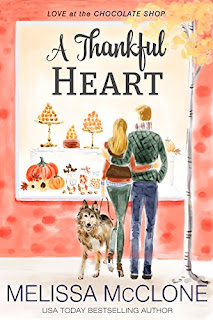 Chocolate is better than men, and so are dogs. At least, that’s what Dakota Parker tells herself as she mends her broken heart and finds forever homes for rescue animals. So far, so good. She can indulge her love of chocolate where she works while her foster dogs provide her with the unconditional love she craves. What more does she need?

Seattle architect Bryce Grayson is counting the days until he can return home to the big city with his father in tow. That is if he can convince his dad to leave Montana. Bryce’s escape plan, however, goes astray when he meets Dakota. Her sweet kisses put the chocolate she sells to shame. Maybe he should be the one to move to Marietta, but could he be happy living in such a small town?

He has until Thanksgiving to decide.

Dakota Parker had two passions, chocolate and animals.  When she wasn't working at Copper Mountain Chocolates, she could be found at Whiskers and Paw Pals.  Volunteering filled her heart with joy and the animals gave her the love she craved.  She didn't think she needed a man in her life until she met the son of one of her volunteers.

Bryce Grayson had rushed to His father's aid when he heard he had fallen off a ladder and had broken both legs.  His goal was to convince his father to move back to Seattle with him where he could be closer if he needs help again.  But Walt had created a life that he loved in Marietta and refuses to leave.  He has friends that he sees often and volunteers at a local animal rescue.

When the animal shelter gets flooded and Walt can't help out, he sends Bryce in his place.  Bryce figures it will give him something to do while he is in town.  Bryce and Dakota soon find themselves drawn to each other and eventually start dating.  They both no it can’t last as Bryce lives in another state.  But who says they can’t enjoy themselves even if it is for a short time?

I really enjoyed this book.  The animal rescue story was a nice addition to the romance.  I also liked seeing how Bryce and Dakota overcame their hesitations about new relationships after they both had bad experiences in the past.  The appearance of characters from past books also makes this book fun to read.  If you are looking for a nice clean romance and love animals, this book is definitely for you.