Mixing It Up by Tracie Banister - Review 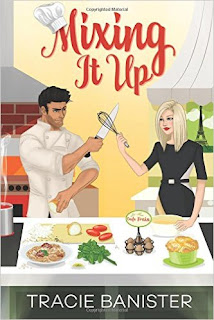 Born with a silver spoon in her mouth, Manhattan upper-cruster Cecily Sinclair now uses that pricey utensil to dish up fancy French fare on her cooking show, Serving Romance. When there’s an executive shake-up at the network, she’s not worried. Not much anyway. Her show’s a hit after all. Why would the new CEO want to mess with success? The driving force behind several buzzed-about networks, Devlin Hayes is considered to be a wunderkind in the television industry. Although his plans to rebrand CuisineTV and make Serving Romance more Millennial-friendly don’t thrill Cecily, her charming, blue-eyed boss is a hard man to say “no” to and she really wants to keep her job—even if that means sharing screen time with a loathsome blast from her past. Mercurial Italian chef Dante Marchetti a.k.a. “Il Duce” was once Cecily’s boss, and she has the PTSD to prove it. Now the owner of one of the hottest restaurants in town, Dante’s egomania knows no bounds and his constant attempts to provoke and upstage Cecily make her want to conk him on the head with a sauté pan. She thinks they’re toxic together, but viewers love their chemistry and clamor for more. As Cecily battles to maintain the integrity of her show, she finds herself scheming and manipulating right along with Dante and Devlin. Is she fighting a lost cause? Does she really belong on TV, or would her culinary talent be better served elsewhere? And could one of the men who makes Cecily’s blood boil ignite a passion in her for something other than food?

An absolute joy to read.  With witty dialogue, fun characters and scenes, this book had me hooked from the start.

Mixing It Up is set to the backdrop of a cooking show so food is mentioned a lot.  Grab your snack before sitting down to read.  There are a lot of comical and entertaining moments between the chefs on the set of the show and in the personal life of Cecily Sinclair who is also part of a high society family which isn't as perfect as they appear.

This story follows Cecily through the changes in her life on air and in private.  It also follows Cecily's quirky astrologist cousin and her best friend as they search and find love.  Cecily also finds love and a new meaning in her life when she decides to mix it up as well.

Anyone who loves a good romantic comedy will really enjoy this book.  It has all of the elements to keep you entertained to the very last page