Review: A Case for the Candle Maker (Ainsley McGregor, #4) by Candace Havens 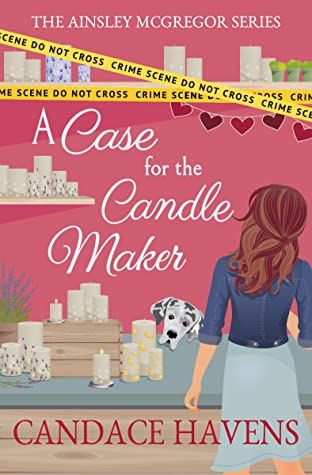 Ainsley McGregor has her hands full preparing for Sweet River’s Valentine’s Day celebration and her bestie’s wedding. So when a mysterious woman pitches selling her candles in Ainsley’s shop, Bless Your Art, Ainsley nearly blows her off. But the candle’s fragrance is evocative, and she can’t resist placing an order.

The candles are a hit, quickly selling out, but when Ainsley calls the woman to buy more, she’s unreachable. Hoping to connect, Ainsley and her Great Dane, George Clooney, stop by the local bed and breakfast. When George whines outside her room, Ainsley is afraid to look. She soon discovers that the candle maker is dead—in a room that was locked from the inside.

Although her brother, the town sheriff, is on the case, Ainsley believes the prime suspect is innocent. Intent to prove it, Ainsley once again drops into sleuth mode, discovering some surprising truths about the mystery woman. But has she just put herself in the killer’s crosshairs?
My Review:

Ainsley McGregor is busy preparing for Sweet River’s Valentine’s Day festival along with her best friend’s wedding, when a new candle maker, Jasmine, shows up at Bless Your Art, wanting to sell her candles.  They quickly become friends and the next thing they know, Jasmine’s sister ends up dead.  But that’s not all, Jasmine’s father is also dead.  Ainsley puts on her sleuthing hat and heads out to solve the mystery.

I have enjoyed all of the Sweet River stories and this one was just as good.  I enjoyed catching up with the characters along with trying to figure out who the new killer was.  This book also has another mystery in it too that was like a bonus.  As always Ainsley’s Great Dane, George Clooney is a fun addition to the story.