Review: Once Upon a Winter Wedding (Holly, Idaho #2) by Jeannie Watt 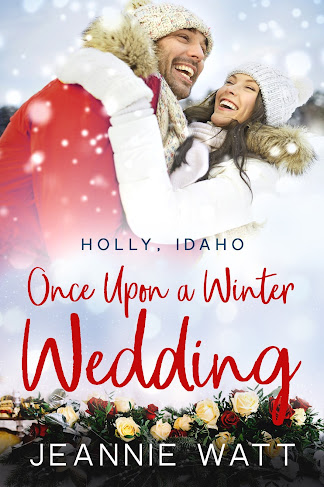 Can opposites attract and plan the perfect winter wedding?

Free-wheeling Stevie Evans is thrilled when her best friend announces she’s getting married and promises to help, never imagining she’d play wedding planner with her bestie’s uptight brother, Brant. She and Brant clashed several years ago and she’s avoided him ever since. But this time she can’t run or hide, and the buzz of attraction is stronger than ever.

Brant Gilroy’s meticulous life plan takes an unexpected turn when he hits a career bump on the same day as his sister’s wedding announcement. She wants to get married at the family tree farm, which he’s been restoring. Brant’s determined to make her day special despite his uncertain future, although he dreads working with her best friend—a woman who’s his complete opposite. So why can’t he get her out of his head?

As Brant and Stevie work together, Brant begins to wonder if they have more in common than they suspected. But how can he convince her that opposites can sometimes make the perfect team?

It’s been ten years since Stevie had a falling out with her best friend Kara’s brother, Brant.  Now Kara wants Stevie and Brandt to work together to plan her wedding.  After they put their disagreements from the past behind them, they find friendship again and soon find themselves falling in love.

This was a fun book to read.  Stevie and Brant were great together once they were able to put the past behind them.  I laughed when the people in town thought they were the ones getting married as they were going to food tastings and ordering flowers.  There were some emotional parts in the story as well, like when Stevie has to overcome her fears and Brandt is there to help her.  Brant is at a crossroads with what he wants to do with his life and with Stevie’s help, he is able to make a decision.  All around, it is a good book.