Review: A Cowboy's Proposal (The Shannon Sisters #1) by C.J. Carmichael 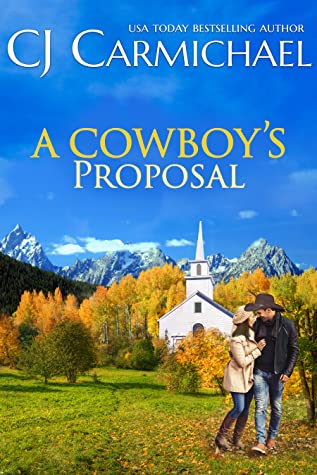 She’s not willing to forgive. He’s unable to forget.

One year ago, Montana cowboy Dylan McLean left the love of his life at the altar and fled town, thinking he was doing the right thing by saving her from a scandal. He’s found success on the rodeo circuit, but his love for Cathleen never faded. Now he’s returned home to clear his name, claim his bride and rebuild his legacy.

Bed-and-breakfast owner Cathleen Shannon has moved on from her broken heart. That is, until Dylan shows up at her house one night asking for help and a second chance. Despite Dylan’s betrayal, she promises to assist with his investigation. She doesn’t want an innocent man to go to jail, but her heart is most definitely off limits.

But Cathleen has forgotten one important fact: Dylan is relentless when he’s going after something he wants. He walked away once, but she won’t let that happen again.

A Great Start of a New Series.

A year ago, Dylan skipped out on his wedding day and joined the rodeo.  His fiancé, Cathleen, was left heartbroken.  Cathleen never forgave Dylan.  So, when Dylan comes back to town, Cathleen let him right off, there would be no reconciliation.  She would only help him clear his name and expose a murderer.  Little did they know, they would have their hands full when more bad things start to happen and fingers are, once again, pointed at Dylan.   As Cathleen and Dylan team up to bring the truth to light, those old feelings start to arise again.  Could there possibly be a future for Dylan and Cathleen after all?

Don't let the title fool you.  This book is not just romance.  There is a lot of mystery in as well.  I enjoyed seeing how this story played out and how Cathleen and Dylan found their way back to each other.  Trying to figure out who the killer was threw me for a loop.  I can’t wait to read the rest of this series.