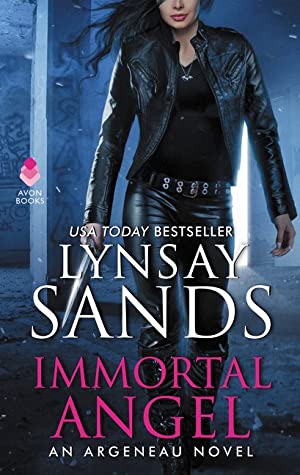 For almost a century, Ildaria Garcia has been on the run, a trouble magnet with a knack for taking down bad guys. Lately, her vigilante tendencies have drawn unwelcome attention to her fellow Immortals. Forced to relocate, Ildaria is supposed to lay low in a new town. Instead, she quickly entangles herself with six and a half feet of muscular, tattooed trouble.

Joshua James Simpson Guiscard, aka G.G., knows a lot about Immortals—enough to make him wary. Yet from the moment Ildaria walks into his club, he feels desire stronger than anything he’s known. Accepting the fact that they might be life mates is disconcerting. But when her past catches up to them, G.G. faces a choice—confront his demons at last, or lose a passion that’s hot as hell.

On the run, from the vampire who caused her accidental turn, Ildaria had finally settled down and much to her surprise, found a life mate, her new boss at a vampire night club, GG.  But when the past catches up to her, Ildaria contemplates running again and leaving GG behind even if it means losing out on love.

I haven’t had the chance to read one of the Argeneau series books in a while and it was fun to catch up.  Reading these books feels like reconnecting with old friends.  I really liked the tough kick-butt Ildaria who is known for getting herself in trouble with the vampire council because of her vigilante ways.  GG is a big rough looking guy with a green mohawk, that no one will mess with, but he has a heart of gold.  He also has a cute little dog who creates some fun scenes too.  All around, I enjoyed this book quite a lot.  I just wish the story was a little longer as I read it too fast.

Thank you to  HarperCollins Publishers and NetGalley for the ARC of this book in exchange for an honest review.