Review: A Spark of Romance by Jamie K. Schmidt 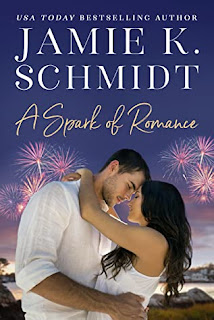 Is she out of reach?

Fire Chief and former Army sergeant Kayleigh Baker is determined to save Mulberry's annual Fourth of July fireworks display. She doesn’t want to disappoint the kids and the fireworks are a bittersweet memory of her mom’s last summer. As the town prepares for the summer parade and picnic, Kayleigh works to convince her former high school crush — now the straight-laced police chief — to help her cause.

Does he stack up?

Police Chief Liam MacAvoy doesn’t like the chaos the fireworks cause for his department and can't hide his relief when they’re cancelled. But now he’s got the woman he’s been in love with for as long as he can remember asking for his help. How can he say no? What he’d really like is to show her that fireworks and town traditions are not the only things worth fighting for.

Can the boy next door and the town hero find the courage to finally seize their chance at love?

Sparks fly and it’s not just the fireworks.

Kayleigh and Liam have been friends forever.  They have also been crushing on each other for the longest time too, but afraid to act on it.  And now they are at odds about the annual fireworks show.  Kayleigh wants to hold the fireworks show in honor of her mother, who used to run the show before she passed away.  But Liam, the police chief, doesn’t want the hassle of it, especially after a little boy got hurt the previous year and Kayleigh set Liam’s car on fire.  So, Kayleigh sets up her own plan to make it happen even if it might upset Liam.  Will they be able to come to a mutual agreement and can they set their differences aside in order to start the relationship they both desperately want?

This was a fun book to read.  The stubbornness between Kayleigh and Liam kept things interesting.  There were quite a few comical moments in the books along with some seriousness.  I enjoyed all of the characters including Kayleigh’s neighbor’s mischievous dog who seemed to steal a couple scenes.
Posted by Janine at 4:00 AM