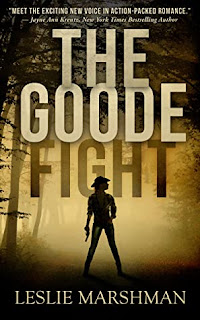 Texas Ranger Samantha Goode never backs down from a fight, especially one right outside her door. Settling into small town life after a long absence, she’s focused on second chances – for herself, for the town, and her renewed relationship with rancher Clay Barnett. But when a dead woman is found on her best friend’s property, Sam’s investigation threatens her fresh start as the residents of Crystal Creek come under suspicion.

Soon, more bodies are discovered from San Antonio to Houston, and Sam realizes she’s hunting her most dangerous opponent – a serial killer. As she chases leads across the state, Sam follows the killer’s trail back to Crystal Creek and those she loves. She’s determined to protect the townspeople, but what if one of them is the evil she hunts?

When the case comes down to her badge or her friends, will Sam have what it takes to fight the Goode fight?

Texas Ranger Samantha Goode has moved back to Crystal Creek and is finally getting settled in.  She also hooked back up with her old boyfriend, Clay and things are going ok.  They just have a few issues to work out.  But then a girl is found murdered and dumped on Sam’s best friend’s property.  Sam soon finds herself on the trail of a serial killer.  When Sam is on the hunt, it is her first priority and Clay isn’t too happy about it.  Will Sam’s job jeopardize their newly rekindled relationship?

This book had me sitting on the edge of my seat and I am ashamed to admit, a couple of dinners didn’t get made on time.  I just couldn’t put it down.  It was an exciting read.  It was so good that I didn’t want it to end.  But I was anxious to find out who the killer was.  And boy was that a surprise.  This book is the second in a series and it can be read on its own.  But I would recommend reading Goode Over Evil first so you will be familiar with the characters.
Posted by Janine at 4:00 AM