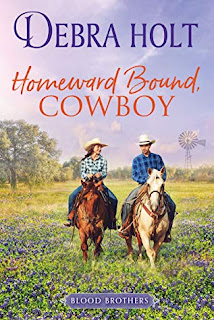 Should he stay, or go…

Nurse Dee McNamara knew heartbreak and tragedy. She’s a survivor but has built high walls to protect her heart. She takes care of everyone but herself, yet never imagined finding another man she’d be able to trust until one day she offered a ride to a tall, darkly handsome cowboy whose eyes hold the same pain and mistrust.

Rio Montez is a man with secrets, and he arrives at Braxton Ranch on a mission to find answers about his father. He thinks the truth will finally give him the peace to finally move on. He never counted on finding the woman who offered answers to his questions.

Rio’s always had a plan until now. Does he leave Braxton Ranch or stay and build a life he never dreamed possible with a woman he’s afraid he’s falling hard for.

Horse trainer, Rio Montez, had a secret and it's what brought him to Texas to work Braxton Ranch.  He just wanted to get the information he was seeking and then he would move on to where ever the wind took him.  But when he met Dee McNamara, he found a reason to stick around.  Or so he thought.

Dee had been hurt in the past and didn't trust men.  Just when she starts to trust Rio, she finds out he kept a secret from her and she calls it quits.  They both end up hurt before they finally find a way back to each other.  And it was a very sweet and memorable reunion.

I really liked how this book played out.  The initial meeting between the characters was a lot of fun and different.  I liked the small town ranch life background and how the romance took its time building up.  I really didn't know what to think Rios's secret was until it was finally revealed.  It took me by surprise.  I would definitely recommend this book to anyone who likes a cowboy romance.  This is the second book in the series but can be read on its own.