Review: The Wedding Lullaby (One Night to Forever, #2) by Melissa McClone 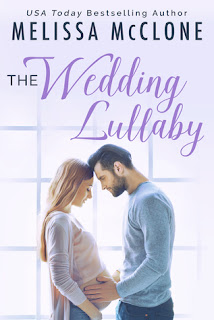 That’s all Laurel Worthington’s joke marriage to Brett Matthews was ever supposed to be. But somewhere between the tacky Reno ceremony and annulment day, the troubled socialite surrendered to the romance of a honeymoon night and her wealthy husband’s undeniable charm.

Now back in the real world, broke and alone, Laurel finds out her faux wedding has produced a very real result. She reaches out to Brett for help, but what can she expect from a virtual stranger—even if he is the father of her unborn child?

Determined to be the kind of father he never had, Brett has his mind set on marriage. But this time around, Laurel won’t settle for less than a love match. Does Brett have what it takes to win her heart and keep his new family together?


An inspirational friends to lovers story with a few twists and turns to keep things interesting.

What else could go wrong for Laurel Worthington?  Her father left town with a younger woman taking Laurel’s trust fund money with him.  Her mother took off to find another rich man to marry.  And, Laurel was left penniless with idea of how to survive without her parents help.  But the kicker was when Laurel found out she is pregnant, after a fake wedding with one of her friends, which ended with them spending the night together in a Las Vegas hotel room.

Brett Matthews had no idea his friend Henry’s yearly birthday event would have repercussions until Laurel showed up at his office asking for a job and telling him she was pregnant.  Brett is a man of honor and wants to marry Laurel, but Laurel doesn’t want to marry someone like her mother and grandmother did, just to have a good life.  Laurel wants to provide for herself and her child on her own.  She just needs a little help getting started with her plan.  That’s where Brett comes in.  But, Brett has a plan of his own to win over Laurel.  He will do anything to keep their child from growing the way he was raised, without a father.  In the process of the plan, Brett and Laurel start to fall in love.  But their road to love isn’t paved in gold.  There are a lot of factors that almost tear them apart.

This was a fun read.  It is a good clean romance with characters you can’t help but cheer on as the story progresses.  I enjoyed getting to know Laurel and Brett and what drove them to who they had become.  Their strengths, fears and concerns all added to the story.  I would recommend this book to anyone who loves a romantic story.