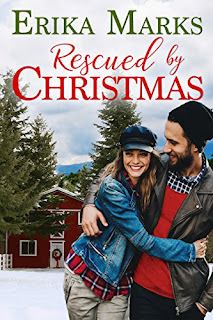 All pop star Jackson Wilder wants this Christmas is a few weeks out of the spotlight in a rented cabin in the Colorado mountains. But when a blizzard leaves him stranded on a country road on his way out of town—and still wearing the Santa costume from a last-minute commercial shoot—he takes shelter in a nearby horse barn to wait out the storm.

Miranda O’Keefe will be lucky to get a wreath up on her door this year. Between raising her six year-old son, Ollie, running her vet practice, and getting her horse rescue project off the ground—Christmas will have to take a back seat. But when Ollie tells Miranda he’s found Santa Claus asleep in their horse barn—and has asked Santa to heal his beloved rescue horse Twisty—the self-reliant single mother finds herself asking for a stranger’s help to grant her son’s Christmas wish.

But when attraction turns to affection, will love come to the rescue this holiday for Miranda and Jackson too?

A sweet story about an unlikely match who make a memorable Christmas for one special little boy.

Pop star, Jackson Wilder, just finished up shooting a Christmas commercial where he portrayed Santa right down to the red suit and spray on white hair and beard.  He slipped out the back door in his costume so his fans wouldn’t recognize him and hit the road to the cabin that he rented to spend Christmas alone working on some new songs.  Along the way Jackson loses control of his car in the snow and wrecks.  He manages to get himself to a barn to take shelter only to be found by Ollie who thinks he really is Santa and he is hurt.

When Ollie comes running to his mom, Miranda O’Keefe, claiming Santa is hurt and needs help, Miranda goes to see what he’s talking about.  She helps Jackson and lets him stay there until the blizzard passes.  During this time, Ollie comes to believe Jackson really is Santa.  Jackson and Miranda play along with it to keep Ollie happy.  But as the days pass, it gets harder and harder to keep Jackson’s true identity a secret.  Will they be able to pull it off until Christmas?  And, will Jackson be able to fulfill Ollie’s one Christmas wish, to help their horse Twisty get better?

I enjoyed this book.  It was almost too short for me.  I was really getting into the story when it started wrapping up.  I liked the relationship that Miranda and Jackson formed.  Ollie was a sweet little guy who I couldn’t help falling for.  I also enjoyed the background of the horse rescue and how much of her heart Miranda put into helping the horses.  The author did a wonderful job keeping the story flowing along and keeping it fun, light hearted and entertaining.  If you’re looking for a sweet Christmas story, don’t miss this one.
Posted by Janine at 5:00 AM