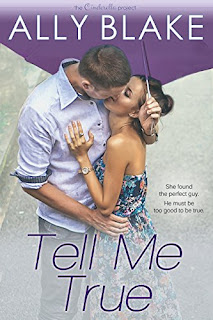 April Swanson is so hopeful about all the possibilities New Year’s might bring, she’s practically Pollyanna. She’s hardly wishing for the world, after all – just a little less family crazy and the promotion she's perfect for. Surely then she can finally let loose and not strive to be such a good girl all the time.

For reformed bad boy, Finn Ward, hope is a four letter word, yet he has a New Year’s wish of his own - to silence his dark and twisted past before it unravels his future and hurts the people he cares about. No matter what.

So why would fate trick two such disparate souls into a fake first date? Maybe because they’ve both made the wrong wish...

April Swanson saw what The Cinderella Project had done for her best friend JJ.  She met the love of her life while on a cruise ship.  So when April needs help landing a coveted promotion at her job, she enlists the help of the organization.  Little did April know she would be getting more than she expected.  She might actually lose her heart to a man she met at a bar during one of her first tests.

Finn Ward has been contemplating leaving his job and town when his father is released from prison.  He wants to keep those he is closest to safe and doesn’t want anything to do with his father.  But when he meets April, things get a little more complicated.

This was a cute story.  I liked April and Finn’s characters.  They had great chemistry together even though they had opposite personalities.  It was fun watching their relationship form.  The book also referenced to characters from previous books so you caught up with them a little bit too.  There were some slow spots in the book and a few spots where I got confused and had to go back and reread what I had just read to get back on track.  But the ending was sweet and made up for the areas where I had trouble.
Posted by Janine at 8:35 AM