review: A Texas Christmas Miracle (The Raffertys of Last Stand #2) by Justine Davis 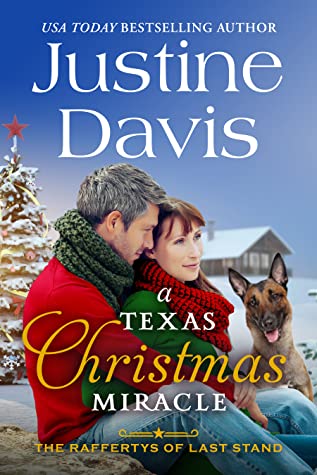 Two people who don't believe in Christmas or miracles...

Retired from special forces and back on his family’s Texas ranch, Chance Rafferty’s finally found some peace through creating a foundation to rescue and retrain military K-9s thought to be beyond redemption. He prefers to be left alone with his dogs and his work, but when a woman arrives shortly before Christmas looking for the dog that saved her husband’s life, Chance is astonished at the dog's—and his own—response to her.

Though it’s been years, Ariel Larson still dreads the Christmas season because it marks the anniversary of her deployed husband's death. When she learns her husband’s K-9 partner survived combat, Ariel feels she’s been given a lifeline to escape her grief. She suddenly has a sense of purpose she’s been desperately missing. But she never expected the man determined to rehabilitate the traumatized animal would have such a stunning impact on her own life.

Can these two wounded hearts come together to create their own Christmas miracle?

An emotional, friends to lovers story.

I couldn’t wait to learn more about Chance Rafferty.  In the previous book, Nothing But Cowboy, he came across as reclusive, living in a remote cabin on his family’s ranch, all alone with no one but his rescue dogs.

When Chance came back from the war, he just wanted to be alone.  He didn’t need friends or family hanging around and butting into his business, especially those who wanted him to start dating again.  Chance was happy retraining former military dogs so they could be adopted.  His current rescue dog was Tri.  Tri was injured during a mission that killed his handler.   When Tri’s handler’s widow, Ariel Larson, shows up looking to adopt Tri, Chance wasn’t sure what to think.  But as time went by, he started to realize Ariel would be a good new owner for Tri.  But there was more in the works.  Chance and Ariel started to to have feelings for each other.  In so many ways, it should be wrong, but in many ways it could be so right.  But was there enough to create a lasting relationship?

This book had my emotions working overtime with the back stories of the characters.  I couldn’t wait to see how Chance and Ariel would finally move away from the friend zone into a relationship.  Seeing Tri’s transformation into civilian life was fun to watch too.  He actually ruled quite a few scenes.  This book is set around Christmas time, the of year Chance and Ariel both dread.  It was interesting to see how they learned to move past that dread.  It was a true Christmas miracle.  I look forward to reading more books in this series when they come out.