Review: Nothing But Cowboy (The Raffertys of Last Stand #1) by Justine Davis 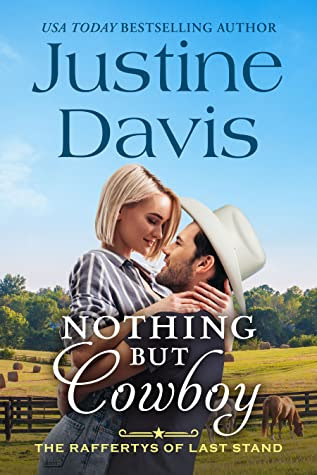 He thought he was content, until she walked in the door…

Keller Rafferty abandoned his dreams long ago to help his mom raise his brothers after his father’s death. Duty, family and deep roots still guide him as he runs his family’s Texas cattle ranch and cares for his new, grieving foster son. They’re just beginning to find a balance when a beautiful and determined woman arrives on the ranch.

Sydney Brock spent her entire globe-trotting life thinking she had no family except her ne'er do well, nomadic, irresponsible parents. When she discovers her parents lied and she has a newly-orphaned cousin, Sydney rushes halfway around the world to provide the teen with something she never had—a home. She’s shocked to be thwarted by a protective—and sexy—cowboy.

Sydney’s determined to form a relationship with her cousin, but Keller doesn’t trust that the worldly woman will stay in small town Texas. It’s up to Sydney to prove him wrong, and the longer she spends time with Keller, his family and her cousin, the more she vows to do just that.

This is a sweet story centered around a boy who loses his parents in a car accident.  Sydney, a world traveler who doesn’t have a place she calls home, learns about her cousin, Lucas, and sets off to Texas to meet him.  She has no idea she will be met by the Raffertys, an overprotective ranching family who have taken Lucas in and raising him as one of their own.  Keller, the oldest son, who took care of his family after losing his father in a war when he was just a teenager, plans on adopting Lucas.  As Sydney gets to know Lucas, she also gets to know the Raffertys and really likes them.  She also starts to fall for Keller; something she never thought would happen.  Maybe the small town of Last Stand, Texas, is where she was meant to be after all.

I thoroughly enjoyed the beginning of this new series.  The writer did a great job bringing this story to life.  The descriptions of the characters and the ranch made it easy to follow.  I look forward to reading the next book in this series.