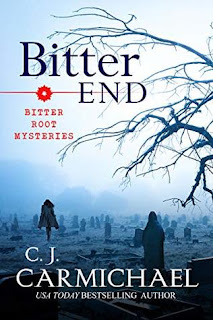 Murder in a small town is always personal.

When a young mother is murdered in the isolated ranching town of Lost Trail, Montana, the father of her child is the first suspect. In this case, there are two: the biological father who hasn’t seen his daughter in over a year and the adoptive father whose life hangs in the balance as he struggles with cancer.

Zak Waller is Lost Trail’s newest deputy. He’s also locked in a power struggle with the town’s old-school Sheriff. If Zak solves this case maybe he’ll finally get the respect he deserves. But is he willing to tear a family apart in the process?

Intriguing and addictive.  I can’t get enough of the residents and town of Lost Trail, Montana.

I really enjoy this series and it was fun to catch up with the characters again.  In this book, Zak Waller has received a shiny new Deputy badge, but he is still stuck behind the dispatch desk most of the time.  But he has a bigger goal in mind.  Zak plans to run for Sheriff during the next election.  While things are starting to heat up between Zak and Nadine Black, the other deputy, Zak is also hard at work on the murder case of Willow McTavish.  There are a lot of suspects, but the clues just aren’t adding up.  But with Zak on the case, he is sure to find the killer.

This story had me hooked from the start.  Along with the mystery of who killed, Willow, I enjoyed catching up with the other characters.  I was anxious to see how Justin and his daughter Geneva were doing and learn more about Justin’s battle with cancer.  I liked seeing how Tiff and Kenny’s relationship was coming along too.  But the main story is the murder.  About half way through the book, I was certain I knew who the killer was when the story took a different turn.  But even then, my guess was wrong.  Let’s just say, this town has a lot of secrets and just when you think you know someone, you don’t really know them at all.   There are a lot of secrets in Lost Trail.   This is a really good story.  Be prepared to be surprised when you read this book.
Posted by Janine at 5:00 AM